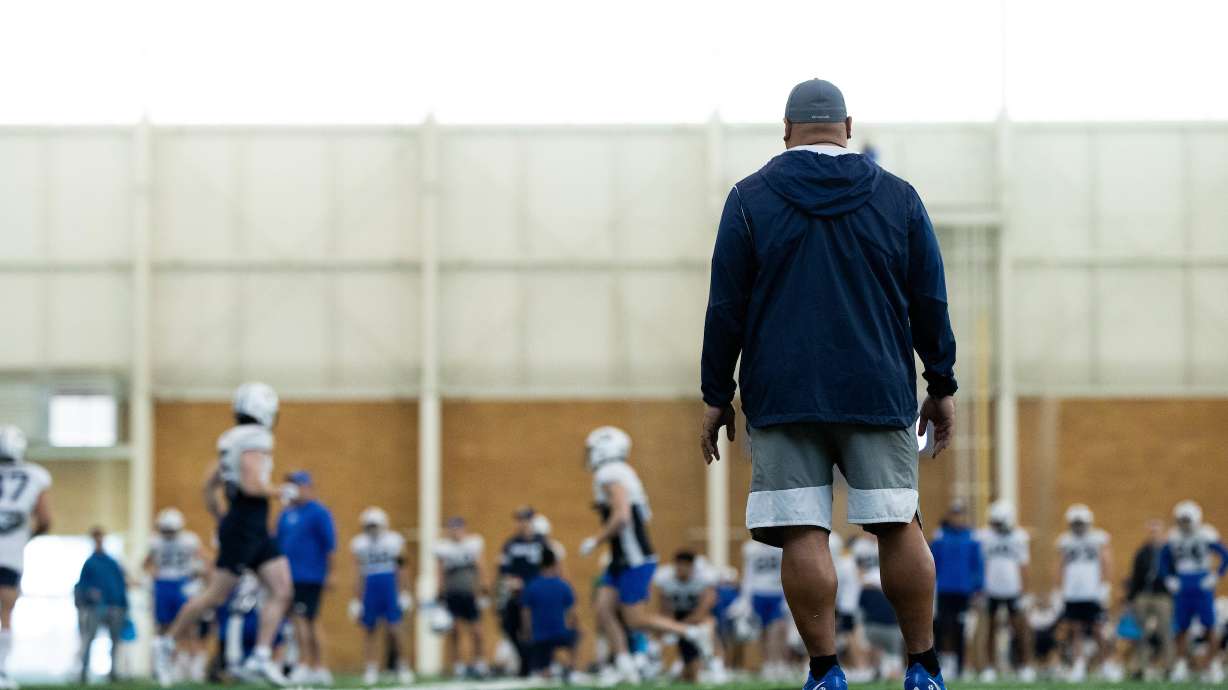 PROVO — BYU’s football team grew further on Monday as head coach Kalani Sitake prepares the schedule for his next transfer to the Big 12 in two years.

Three months after adding a handful of on-field support staff, Sitake has introduced eight new staff additions and promotions to complete a staff that will be led by new chief of football staff Jon Swift. Of the group, six are promotions or additions from other areas of the athletic department, including student life and academics.

“Kalani’s vision has always been for us to get where we are with the bodies we have in the building, both in the coaching staff and in the support staff,” Swift said. “Rewarding those efforts and sticking with the people who got us here made the most sense.”

The moves are a continuation of athletic director Tom Holmoe’s “unprecedented” extension offered to Sitake throughout the 2027 season, and increase the Cougars’ program budget to the size of their future peers in the new conference.

“Tom said it was unprecedented, which means we’re going to be going through waves of people being added,” Sitake said. “I’m not really patient so I’ll keep asking – and in the meantime we’ll be working to get this team ready to play for the season. We’re operating as a P5 program; we’ve been doing that for a long time. The work is the.

Swift has spent the past four years as director of football operations. In this role, he focused on the day-to-day operations of the Football Department, including active roster management and liaison with the Office of Student Life and Admissions.

In his new role, the Cincinnati, Ohio native, who earned his undergraduate degrees at BYU, will lead a team of football support personnel managers in areas including recruiting, player experience, relationships with alumni and player development.

Billy Nixon replaces Swift as Director of Football Operations after spending seven seasons on Sitake’s support staff, including Director of Equipment Operations and Player Experience since January 2021, where he has helped to codify the Cougars’ uniform and brand lineup with a designed slate of royal, navy blue and white. helmets, jerseys and pants.

Bradley, a BYU defensive back from 2007-2010 and owner of the DB University Elite skills training program, has been an academic advisor at BYU’s student-athlete center since 2018, after a three-year stint as an athletics program manager. extramurals at BYU, where he oversaw the university’s acclaimed club programs like men’s and women’s rugby, lacrosse and men’s soccer.

Hall, who played shooting guard at BYU 2003-05 before a five-year career in the Continental Basketball Association, is transitioning from his role as honor code office administrator to director of player development who will work working closely with BYU’s Built4Life initiative and will manage internship and other off-field opportunities for the football team.

Wilcox has been the team nutritionist for the BYU football program since 2012, when he founded Elite Nutrition and Fitness Coaching. The former PGA professional and University of Utah graduate has dedicated 30 years to understanding the science of the human body and the psychology of success, and will put that experience to work for BYU football.

“I’m a competitor,” Bradley said. “The opportunity to come in and be a part of this as BYU prepares to go to the Big 12 was very appealing to me, to be a part and to make BYU a competitor – not just in the Big 12, but in the Big 12. nationally. I think that’s the vision that Kalani and Jon have, and the sports administration. Just knowing that was the goal and the vision, it was exciting for me to be there. go and be part of it.

“I think we all felt out of breath, so it would be nice to go a little deeper in every aspect of the program,” Nixon said.

The two additions will also complete the rest of the staff as they also prepare to join the Big 12 in 2023.

Former BYU wide receiver Justin Anderson returns to Provo as director of player personnel after spending the past six seasons in the same role at East Carolina. Anderson, who played at BYU from 2000-2002, returns to BYU after serving in the same position on the Bronco Mendenhall staff in 2015 – before following Mendenhall to Virginia and helping the Cavaliers sign both recruiting classes highest ranked in the program’s history.

Josh Hewitt has been hired to replace Nixon as director of football equipment operations after similar roles at three schools over the past eight years, most recently at UNLV.

It won’t take long for Cougar Nation to recognize that he is arguably the best in the country and will take our program to the next level. With him at the helm, we are taking a step closer to providing our athletes with the best playing experience in college football.

A third-generation equipment manager, Hewitt is just the fourth football equipment manager at BYU in the past 75 years and comes to Provo after spending his entire life with the company. A starting offensive lineman for four years at Avila University in Kansas City, Hewitt’s father, Todd, was the club’s equipment manager for Los Angeles/St. Louis Rams from 1979 to 2011 and first gave Hewitt a start in the hall named after his grandfather Don.

“Equipment is in the blood. I’m not going anywhere else,” Hewitt said. I don’t think you can find a better place to be, to do what you want to do, to support the players and staff to make it better.

“That’s all we’re going to do: continue to build on what Billy started, improve on it in any way we can.”

Prior to spending the last three years at UNLV, Hewitt led football equipment operations in Fresno State, central Arkansas, and worked with the NFL Rams and Royals of MLB’s Kansas City in the field from 2010 to 2014.

“Josh is a very humble guy, and he didn’t want to expand his biography. But we need Cougar Nation to know who we have on board with us,” Nixon said. “I was very impressed with the Hewitt family. I got to know his father Todd at USC, and I was so impressed with what he was doing to improve the player experience.

“To see what he’s done for the past two years at UNLV, to take their uniform game to the next level…in the gear world, it doesn’t go unnoticed.”

Sean Walker graduated from Syracuse University and returned to his home country to work for KSL.com covering BYU, prep sports and anything his editors throw at him. When he’s not covering a game, he’s usually listening to Broadway soundtracks or hiking with his dog.