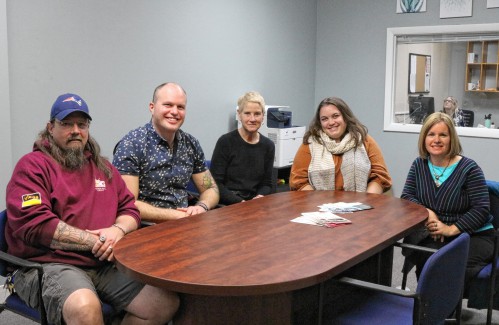 GREENFIELD — After about two years of meeting at Baystate Franklin Medical Center, the COVID-19 pandemic meant the Greenfield Suicide Loss Support Group had to consider another way to meet.

“Zoom took a lot of the personality away from me,” group host Donn Brooks said of the group’s initial shift to meeting remotely. “I like going face to face because you get people’s energy and a sense of what’s going on.”

With other nearby groups offering regular Zoom meetings, including one in Northampton, virtual support groups weren’t necessarily what the Greenfield-based group aimed to prioritize.

“We kind of felt like that niche was already filled,” said Jennifer Matoney, who co-founded the group in 2018 with Brooks.

After bouncing between various outdoor locations – including the church grounds and Highland Park – increasingly cold temperatures and increasingly reduced hours of daylight in the evening made it appear that continuing to exterior would not be sustainable in the long term.

After a hiatus of about a year, Matoney began calling to find a place where the band could meet indoors. When that effort failed, she turned to a regional mailing list.

“I reached out and heard from the Mental Health Association (MHA),” Matoney said. “I said we were looking for a space in Greenfield, and (MHA) was so generous in providing the space.”

Since November, the group has found a new home at the Mental Health Association in Mohawk Mall. The peer-led group, which is free and open to anyone 18 or older who has lost a loved one to suicide, now meets there monthly on the second Tuesday of the month from 5:30 p.m. to 7 p.m.

“A very big part of my role at MHA is to encourage, facilitate and maintain partnerships that complement our work and allow us to engage with people who may not be familiar with our work,” said Kimberley Lee. , Vice President of Resource Development and Branding at the Mental Health Association. “I saw (the demand for space) and immediately thought this would be a wonderful way for us to be a new neighbor, as our program is relatively new here in Greenfield.”

The Mental Health Association, which is based in Springfield, moved to Franklin County about two years ago, said Olivia Bernstein, clinical director of homeless services. The program works with youth and young adults experiencing homelessness or at risk of homelessness. The association supports their accommodation.

Matoney said she was grateful to partner with the Mental Health Association for the space, located on the first floor of 91 Main St., as it offers members some privacy from the building’s lobby, as well as private restrooms and a supply of tissues.

“It really is a neutral space,” she said. “When you organize a support group like the type we have, you want a neutral space. In some ways, I think some people might prefer that to going to the hospital. We are so grateful that Baystate allowed us to use their space, but it really is a great space for us.”

Although they operate independently of each other, Brooks added that the two entities – the Suicide Loss Support Group and the Mental Health Association – “fit together really well.”

“They are puzzle pieces that fit together,” he said.

Since the group formed in the spring of 2018, it’s seen some members come and go, and others stay long-term.

“It’s kind of the nature of support groups,” said Matoney, who has been leading suicide support groups for about a decade since her mother, Lynn Matoney, took her own life.

Brooks, who lost his friend Dan Dowd to suicide in 2017, added that changing members can also be a sign that the group is working and people are healing.

“I don’t want to say you heal 100% completely, but maybe the band makes the pain bearable,” he said.

Following a friend’s recommendation, Ben Delozier, who is in the process of taking Matoney’s place as host, said he joined the group in early 2019 after losing his partner to suicide.

“It seems like now more than ever, there are so many things we cling to that hang over us every moment of every day,” Delozier said. “It’s all happening under the surface and nobody talks about it. I think with this band, it invites people to take a break.

Since joining the group, Delozier said he found a space to feel less isolated in his feelings.

“Losing my partner to suicide was the most isolating experience I’ve ever had in my life,” he said. “When I sit down with a group of people who have some version of that experience. … There’s something intensely unique about someone else who’s gone through that kind of loss.

While trust is often something that’s a gradual process, he said, there’s an “immediate trust” that comes from hearing someone “talk so intensely about how I feel.”

“Even in dark times,” you can still find camaraderie between people, Brooks said.

Matoney and Delozier joked about “meeting after meeting,” where unexpected conversations can spark lasting relationships between members.

She acknowledged that it can take a lot of courage for a person to show up to their first meeting.

“Especially if it’s your first time,” she said. “I would just encourage new people to give it a try, even if you’re going through what’s probably the hardest thing you’ve ever been through in your life.”

Matoney added that no one is obligated to speak.

“Even if you don’t say anything, you know at the end of the meeting that you’re not alone,” Brooks said. “That’s the whole point: finding out that there are other people who have those feelings too.”

And it’s the possibility of feeling less alone that has kept Delozier coming back to every meeting and why he’s starting to move into the role of facilitator.