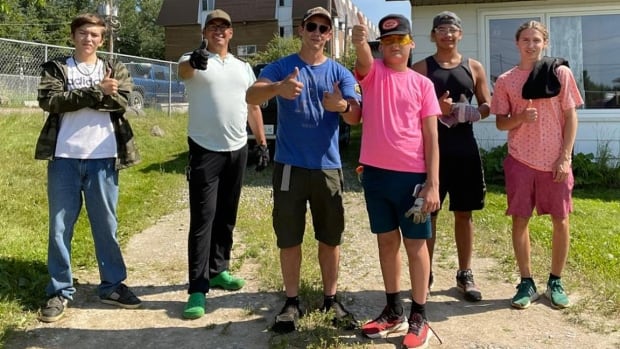 A year ago, Tristen Durocher and Chris Merasty left Air Ronge in northern Saskatchewan to walk to Regina Provincial Legislative Land, a distance of over 600 kilometers.

They aimed to raise awareness of the high rates of youth suicide in the North, calling on the provincial government to pass a suicide prevention bill that had recently been defeated. This bill has since been passed.

Now Merasty continues his work with a program he started in La Ronge called Men of the North. He works with young men as part of the program, creating an environment where they can help each other and learn about their culture.

“I was just thinking, ‘Why isn’t there a support system in the community for men?’” Merasty said. “There are a lot of programs here based on women, kids, and the elderly and stuff like that, but nothing too specific that focuses and deals with men.”

Men of the North held their first meetings in early 2020, and the group continues to find ways to support men of all ages with suicidal thoughts and depression, Merasty said.

The program is a much-needed alternative to the type of care that men in his community are usually offered, he says.

“A lot of us have to take these northern roads to go to these specialists and get the help and attention we need. We don’t have the proper amenities.”

Merasty says the program is a tangible way to make a difference in his community by working with young men who might otherwise be at higher risk for suicide or for depression and other mental health issues.

The ages of boys and men currently participating in the program range from 12 to 78 years old.

Right now, the young men in the program are taking on a “40-meter challenge,” working to clean the yards of some 40 elders in their community.

If they are successful, they will win a four-day canoe trip.

It has been a year since Tristen Durocher and Chris Merasty left Air Ronge, Sask., For legislative ground in Regina. They were raising awareness of the high rates of youth suicide in the North and calling on the provincial government to pass a recently defeated suicide prevention bill. This bill has since been accepted by the government. Today we spoke with Doyle Vermette, the member for Cumberland who introduced the bill. We also spoke with Chris Merasty about the program he started, Men of the North, where he works with young men and creates an environment where they can support each other, learn about their culture and gain respect from their community. 42:24

If you are having thoughts of suicide or having a mental health crisis, help is available.

For an emergency or crisis, dial 911.

You can also text CONNECT to 686868 and get immediate help from an emergency responder through the Crisis Text Line, powered by Kids Help Phone. You can also reach Kids Help Phone at 1-800-668-6868, or you can access live chat advice at www.jeuneshelpphone.ca.