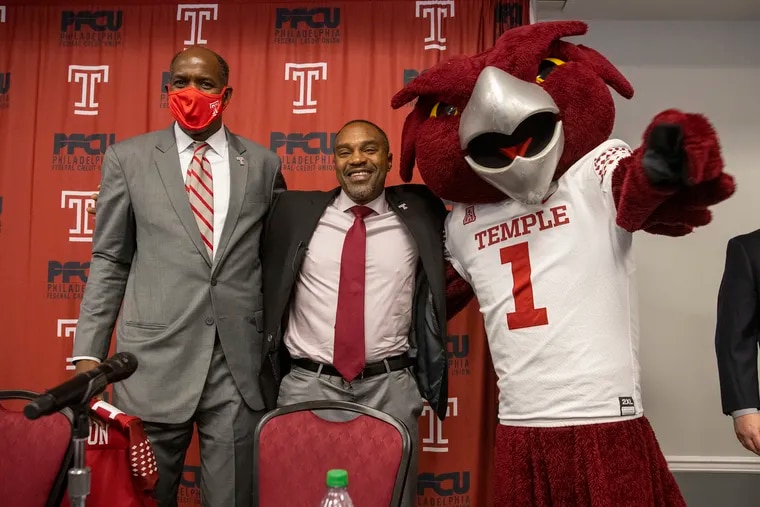 Temple football coach Stan Drayton plans to instill his core values ​​in his team and build a tough, physical schedule that controls the tempo.

Since being hired on December 15, Drayton has been looking for staff to match his vision. His first priority was to seek out coaches connected to the region.

Unlike former coach Rod Carey, who brought most of his staff with him from northern Illinois, Drayton’s staff has few ties to Texas, where he has spent the past four seasons as a running backs coach.

Here’s a rundown of the people Drayton has hired into his team so far:

Offensive Coordinator and Quarterbacks Coach: Danny Langsdorf, a former Colorado quarterbacks coach, has been in the coaching business for 25 years, with experience coming from the college and NFL levels.

While at Temple, he was known for coaching his linemen to play multiple positions and sent eight players to the NFL, including 2017 second-round pick Dion Dawkins, a Buffalo Bills guard.

Brown is known for his local ties to the area after spending six seasons as head coach of Woodrow Wilson High School in Camden. He led the program to back-to-back South Jersey Group 3 titles in 2018 and 2019.

Defensive co-coordinators and safety coach: Drayton’s defense will be led by DJ Eliot, whose college coaching experience dates back to 1999. Eliot became Temple’s co-defensive coordinator after three seasons as Kansas DC. His previous stops in this role also include Colorado and Kentucky.

Adams joined Villanova in 2015 and took over as defensive coordinator in 2019. Under his tutelage, graduate linebacker Forrest Rhyne became the program’s first player in 28 years to be named Colonial Athletic Association Defensive Player of the Year. .

Linebackers Coach: Chris Woods will be in charge of coaching Temple’s linebackers. He reconnects with Eliot since their stay in Kansas the last two seasons. The Milton, Mass. native also served as Oklahoma’s defensive quality control coach and appeared in three bowl games from 2015-17.

Cornerbacks Coach: Drayton’s defensive team is rounded out by Jules Montinar. In his only season at Florida, coaching in the same role, the Gators finished atop the Southeastern Conference in pass defense — after finishing ninth the previous year.

Early in his career, he spent two seasons as a defensive graduate assistant under Nick Saban, including the 2013 BCS National Championship from Alabama.

Leader: Everett Withers, along with director of football operations Tory Tekyl, are the only rookies whose time in Texas has overlapped with both Drayton and Temple athletic director Arthur Johnson.

The Charlotte, North Carolina native has been a “trusted confidant” of Drayton for many years, according to a statement.

Director of Football Operations: Tory Tekyl has spent the past two seasons as assistant director of football operations and director of player development at Kansas. Prior to that, she was the Longhorns’ operations manager under Tom Herman (2017-19).

Chris Fenelon will lead the group after three seasons as a member of Ohio State’s football strength and conditioning team. During his tenure with the Buckeyes, he saw two Big Ten championships and two college football playoff appearances.

Andrew Brooks, who comes from the US Army Combat Aviation Brigade, and Helix Elite Performance founder Bruce Johnson will serve as Fenelon’s assistants.

“I’m very happy to be working with Chris, Andrew and Bruce,” Drayton said. “Each brings a wealth of knowledge and experience in preparing student-athletes to compete at their best. They have worked with exceptional athletes and helped them reach levels they never would have reached without their guidance.