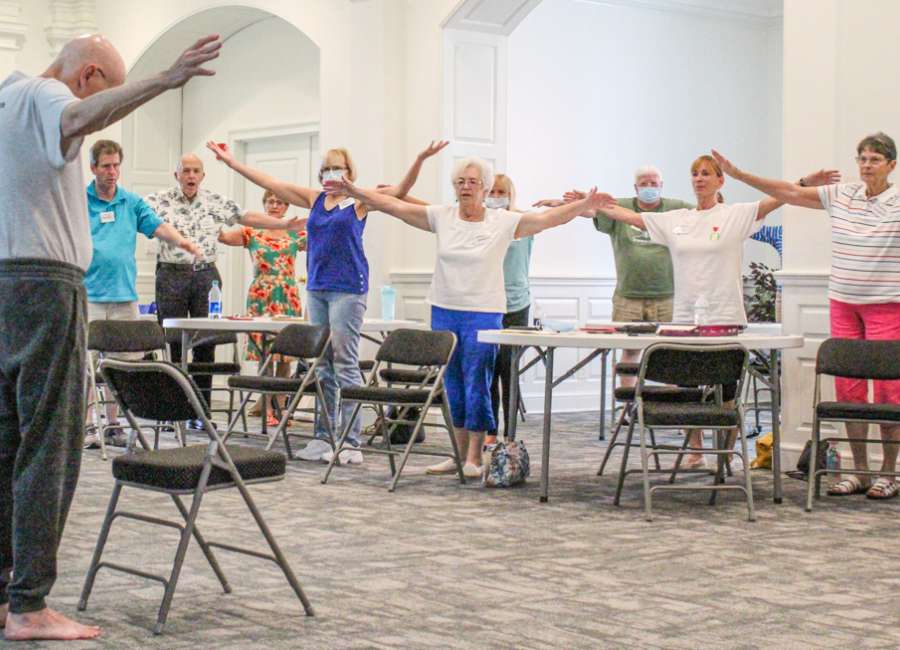 Gary May, front, leads the Newnan Parkinson’s Support Group in a warm-up before demonstrating yoga techniques.

The day also provides an opportunity to raise funds for research specific to Parkinson’s disease.

According to the Parkinson’s Foundation (www.parkinson.org), Parkinson’s disease is the second most common neurodegenerative disease after Alzheimer’s disease and affects approximately 10 million people worldwide and over 1 million in the United States. .

About 60,000 Americans are diagnosed with PD each year. PD is more common in older people, with clinical diagnosis usually occurring after age 60.

Parkinson’s disease results from the loss of cells in an area of ​​the brain called the substantia nigra, where the cells that produce the chemical neurotransmitter dopamine stop working and die. Dopamine allows the transmission of nerve messages from the brain to the muscles and is crucial for voluntary movement.

As we age, cells in the substantia nigra slowly begin to die. But in Parkinson’s disease, neurons in the substantia nigra die off much faster than normal. Once about 70% of the cells are dead, the motor problems associated with the disease begin to appear. Not only does Parkinson’s disease disrupt brain networks that control movement, but it can also affect other networks related to mood, behavior, and thinking (cognition).

The disease is progressive and idiosyncratic, affecting each person in different ways with various motor and non-motor symptoms that progressively worsen over time. Classic motor or movement-related symptoms of the disease include tremors, rigidity, slow movements, poor balance, and difficulty walking. People with PD are often also affected by a variety of non-motor symptoms such as loss of smell, sleep behavior disturbances and constipation.

The root cause of PD is unknown and there is no known cure. Yet, with proper medication, regular exercise, a healthy lifestyle, and a caring support team, most Parkinson’s patients can lead productive and fulfilling lives for many years.

The Newnan Parkinson Support Group has a similar mission of promoting awareness while meeting the needs of its more than 40 members and their carers locally. The group meets the second Tuesday of each month at Newnan First United Methodist Church at 2:30 p.m.

The guest speaker for the next meeting scheduled for Tuesday, April 12 is David Kinrade, First United Methodist’s music minister. Kinrade will speak about the role of music in the management of Parkinson’s disease. For more information, visit the group’s website at www.newnanpd.org.

The support group is also affiliated with the PD Advocate program. The Advocate program provides trained advocates – volunteers who have experienced the effects of the disease – to support and support new patients with Parkinson’s disease in a number of ways, such as pointing out helpful information and resources, as well as providing encouragement and emotional support.