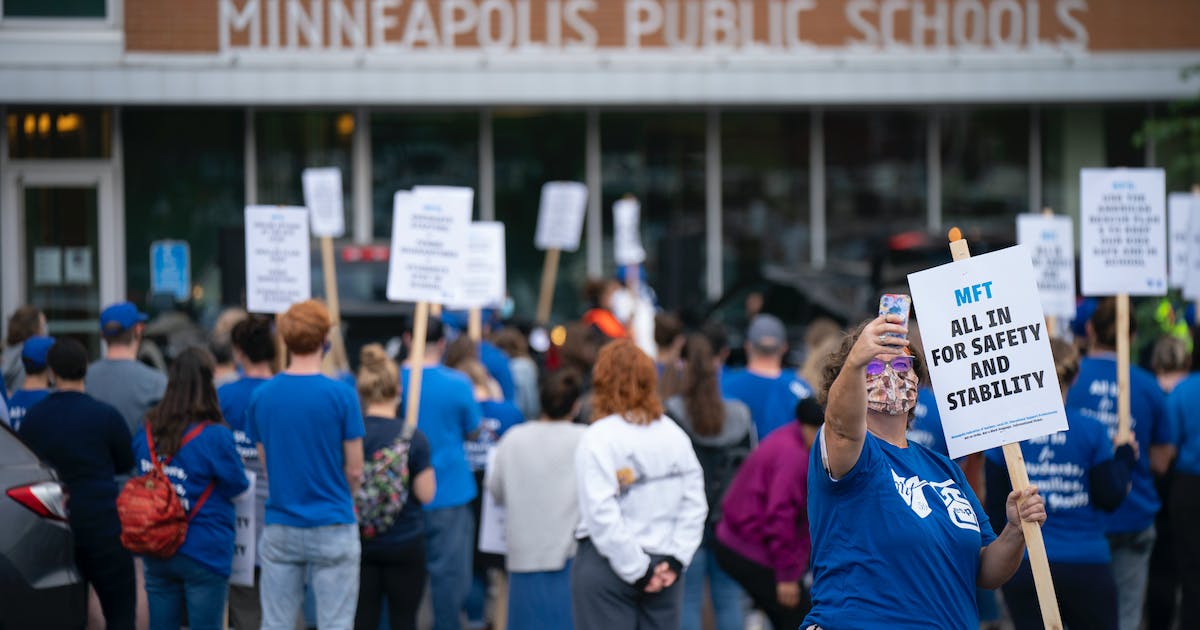 Teachers and education support staff in the Minneapolis and St. Paul school districts voted to authorize a strike against the districts.

Authorization votes do not necessarily trigger a strike – union leaders should formally notify their districts if they determine a strike is necessary. State law requires unions to give the district at least 10 days notice before the first day of a strike.

With cheers and hugs, the Minneapolis Federation of Teachers (MFT) reported Thursday that 98% of support staff and 97% of teachers voted to authorize a strike, with a turnout well over 90%.

St. Paul teachers also voted Thursday on whether to authorize a strike — a decision the union made two years ago. More than 78% of the Federation of Educators of Saint-Paul voted in favor of the strike. Nearly two-thirds of the roughly 3,680 members cast their ballots Thursday, including the three SPFE bargaining groups – teachers, teaching assistants and school and community service professionals.

“Nobody wants to strike, but the district leaders have not moved and even want to reverse the investments that our students need,” said Leah VanDassor, president of the Federation of St. Paul Educators. “The past two years have been difficult for everyone. It has also shown us that students need even more support, not less. The short-term sacrifice of a strike is worth it so that our students have the schools they deserve for years to come.”

Negotiations in the two districts have dragged on for months, stalled over concerns about salaries, student mental health supports, class sizes and efforts to recruit and retain teachers of color. The Minneapolis Teachers Union is pushing to raise starting salaries for education support professionals to $35,000 from $24,000.

Shaun Laden, president of MFT’s Educational Support Professionals Section, congratulated his group for participating. “The historic turnout proves that our members have a sense of their collective power and believe the status quo is unacceptable,” he said.

“While a teacher strike is the last thing we want to consider, we know we are a resilient community that can and will work together on behalf of student learning,” Graff said in the letter.

Joe Gothard, superintendent of St. Paul Schools, said at a press conference last week that declining enrollment has further strained the district’s finances and that he cannot sustain salary increases and the additional aid requested by the SPFE. He also called for unity and stability, saying “more than ever, we need to come together as an organization.”

The Minneapolis teachers’ union has a mediation session with the district on Friday and will meet again on Tuesday.