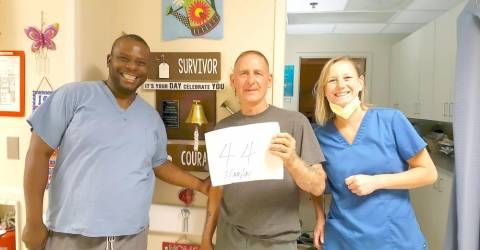 His name is Gary Gardner and he says he “usually sits in the back row”. He is not one of those people who rises to lead the group, until now. You see, Gardner has prostate cancer. He’s in remission now, but there’s a good chance it could come back. His father died of the disease at age 64. Gardner knew it was hereditary and basically he probably had a target on his back, so he pushed his doctors to do something called a PSA test regularly. They did, and in 2019 he was diagnosed with stage 1 prostate cancer. It went away, then it came back. Now the once quiet Gardner is on a mission to form the Prostate Cancer Support and Awareness Group here in Sussex County.

A PSA test measures the amount of prostate-specific antigen (PSA) in a man’s blood. PSA is a protein produced by both cancerous and non-cancerous tissue in the prostate, a small gland located below the bladder in men. According to the National Cancer Institute, there is no specific normal or abnormal level of PSA in the blood, although in the past PSA levels of 4.0 ng/ml or less were considered normal. And in general, the higher a man’s PSA level, the more likely he is to get prostate cancer.

“Disease is a silent killer and along the same lines nobody wants to talk about it,” he said. “Men just don’t do that, but we have to. That’s why I’m stepping out from behind the rafters and taking the initiative to make this support group a reality.

Gardner carries with him the memories of two prostate cancer deaths. One is that of his father and the other was a neighbor named Doug Ernst, who died of an aggressive version of cancer in December 2019.

The pain of not knowing

“Doug’s prostate cancer came on very quickly,” said his widow, Cindy Ernst. “He had some weird symptoms including going to the toilet very often so he went to the doctor. What bothers me to this day is that none of us remember the doctor ever checking his PSA before. This time it did and it was high and it had spread to other areas. This meant it was too late to remove the prostate.

Doug Ernst lived knowing he had the disease for about five years. He tried about six different treatments, but none of them worked. It was too advanced.

“People don’t understand,” Cindy Ernst said with another analogy. “The barn is already closed and the horse is in the meadow.”

Her husband first received an injection and the PSA level went down to 2.0 ng/ml, but then it went up to four, then to seven. Doctors tried pills, chemotherapy and double chemo, and shortly before Thanksgiving 2019, his PSA hit 600.

“He had a lot of pain in his hip,” Cindy Ernst said, “They tried radiation therapy for pain relief.

This meant she had to leave work at noon, come home and put her husband in a wheelchair, get him into the car by herself and take him to his treatment and back. Then she had to go back to work.

On that Thanksgiving night, she said her legs started to swell and “weep” some kind of poison coming out. On Saturday evening, he couldn’t even stand on his own. She took him to the hospital and he died on Monday evening.

“I will never forgive the hospital for not communicating with me,” Cindy Ernst said. “I’m a palliative care nurse and they didn’t tell me how his body was closing up and the pain he was in. No one would say, ‘Let’s just make him comfortable. “”

End-of-life medications, such as morphine, were never administered.

Knowledge is the key

With Gardner, he knew it ran in his family, so he got tested. Gardner was diagnosed at age 57, in 2013, and is now 66. He is still in stage 1 and has had many treatments over the years as his PSA has increased. He underwent robotic treatment and had his prostate removed.

“My advice is for men to get their PSA checked and do their own research,” he said. “Talking to others is a big help and Doug has been a big help to me and I think I helped him.”

Another neighbor, Don Howering, knew prostate cancer ran in his family. His PSA numbers increased in 2014, he had a biopsy and there was no cancer. In July last year he had an MRI as his numbers increased again. In March of this year the numbers were up again, so a biopsy was done, and out of 18 samples taken, two were positive for prostate cancer.

“Of course you can keep an eye on it and watch and wait, but it doesn’t go away,” Howering said. “I was given a choice, but I knew if I did radiation first I couldn’t have the operation, so I had it removed.”

The Prostate Cancer Awareness and Support Group will kick off September 13 at the Parish Community of Saint Kateri in Sparta. Men and women from all walks of life are welcome and there is no charge.

“Men don’t talk about these things,” Gardner said, “but they need to. There is so much information to share. Our goal is to assist in the spiritual and mental healing of these men and their families who are coping with the diagnosis, treatment and side effects of this disease. We want to bring together a group of people with prostate cancer who want to share their experience.

Howering and Cindy Ernst think the group is going to be extremely helpful.

“There are lifestyle changes you can make to lower your PSA and there are ways to manage side effects that need to be shared,” Howering said.

“At the end of the day, most men don’t want to talk about it; they need it,” Cindy Ernst said.

Gardner added, “Cancer sometimes doesn’t have a delete button, only a pause or hold button.”

Out of 100 American men, about 13 will get prostate cancer in their lifetime

If you carry the BRCA1 or BRCA2 genes, you are at greater risk of prostate cancer