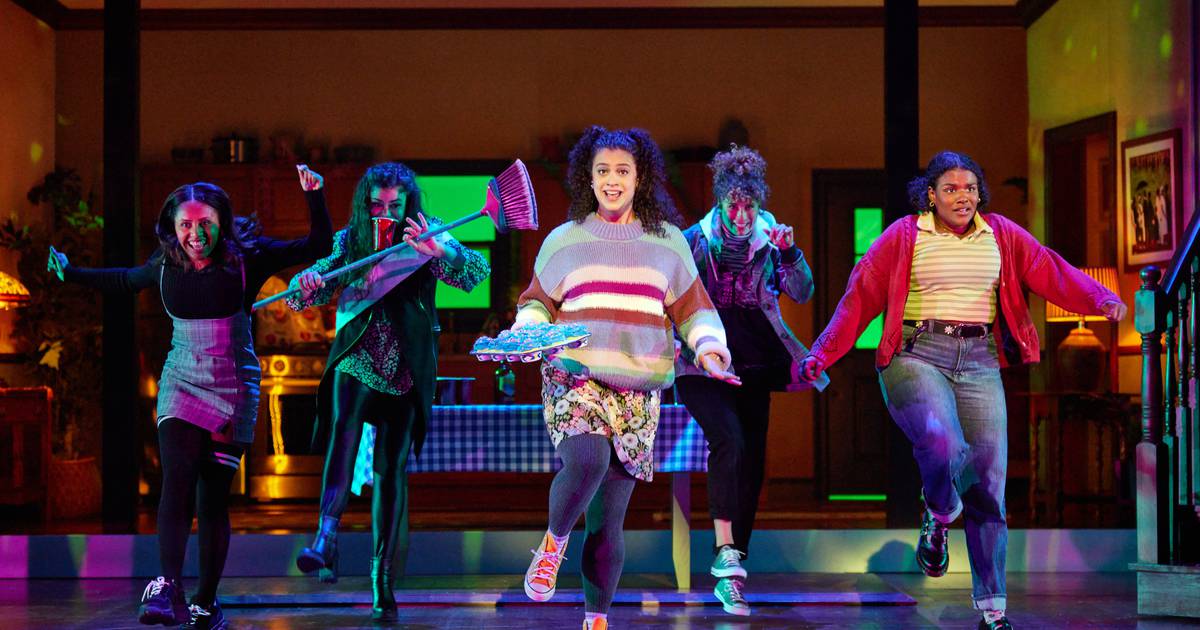 When my mother died in 1994, my father called me at work. I was not at my desk. Instead of just telling me to call him back, he left a message with the horrible news and asked me not to call him until the next day because of all the arrangements he had to make. I wanted so badly to call right away, but I respected his wishes and waited, mourning the loss of my mother with the support of my wife and brothers, but not dad. I just wanted to talk.

It reminded me of after seeing how “Life After,” a musical with its Chicago premiere at the Goodman Theater, begins with phone messages retrieved by 16-year-old Alice Carter (Samantha Williams). The first is from his father, Frank (Paul Alexander Nolan), a fairly successful self-help author. He wants her to call him; he feels bad about an argument the two had earlier that day – Alice’s birthday. Frank wants to talk before his 8:00 flight.

Before Alice can call her father, she notices several more messages – one from her mother, Beth (Bryonha Marie Parham), saying, “You should go home; something just happened. Another from Alice’s older sister, Kate (Skyler Volpe), which reinforces the urgency (“Mom’s trying to reach you, where are you?”); and one from Alice’s best friend Hannah (Lucy Panush) with birthday wishes.

The “something” that just happened was a car accident that took Frank’s life. Nowhere near the airport. At 8:22 that night, 22 minutes after his flight would have departed. Why was Frank still there? Why was he in this part of town? Why did he miss his flight? Was he looking for Alice to have this conversation he left the message for? Is Frank’s death partly Alice’s fault?

Alice is assaulted by all these thoughts, brought to musical life by a kind of Greek choir, the Furies (Ashley Pérez Flanagan, Lauryn Hobbs and Chelsea Williams). Alice mourns the passing of her father and the last words she said to him, but to get through the grief she needs to know the truthful answers to all those nagging questions.

Britta Johnson, the Canadian composer, lyricist and author of ‘Life After’, has viewers in the palm of her hand with this intriguing story that isn’t biographical but was inspired by her own teenage grief at death. from his father. While there were a number of laughs (among the many well-meaning pranks and pans the Carters have to graciously accept, and Panush’s self-deprecating humor as Hannah), there were plenty of quiet ifs. that you could hear pin-drop moments, too.

Credit goes to the wide variety of original musical numbers, poignant character interactions, and impressive performances from the entire cast of nine (including Jen Sese as Alice’s favorite teacher, Mrs. Hopkins), under the directed by Annie Tippe.

I also applaud set designer Todd Rosenthal’s two-story set which features a beautiful curved staircase between levels, as well as sets/backdrops that fly either side of the stage, under the stage or rafters. The second floor even becomes a high school hallway with lockers in a quick transition. Sarafina Bush’s costumes are also remarkable; with quick costume changes, these Furies grow into adults at a private memorial reception, carhops at a drive-in chicken restaurant, high school kids and more, quickly communicating character change through their outfits and mannerisms .

Presented without an intermission, the 95-minute musical doesn’t just focus on Alice’s “life after” journey. We also see how Beth and Kate deal with their grief, both even using some of Frank’s self-help information (“Control what you can and drop the rest”) in a song aimed at Alice. It should be noted that Frank doesn’t just appear in the first scene and then die, never to be seen again until the arcs; Nolan’s character actively participates in the imagination and memory of Alice and the memories of his wife and eldest daughter.

I also have to say that one of my favorite scenes is when Johnson inserts no dialogue or song lyrics for several minutes, but communicates volumes through the interactions of three key characters.

My only negatives with this production: the lyrics are sometimes too fast or overlap so much (several singers, different lyrics) that it is difficult to catch everything, and this problem is all the more worrying when the nine-member orchestra leads by Chris Kong is sometimes too loud for the singers to be heard easily.

Because life after the Goodman series of “Life After” is not certain, check it now; when it hits Broadway — as it deserves — you can say you really enjoyed “After” before. Unlike my phone message in 1994, this is a very good grief.

• Paul Lockwood is a singer, local theater actor, member of Grace Lutheran Church (Woodstock) and Toastmasters, occasional theater critic, podcaster, columnist and past president of TownSquare Players. He has lived in Woodstock for over 21 years.

IF YOU ARE GOING TO

WHEN: Until July 17; mandatory masks