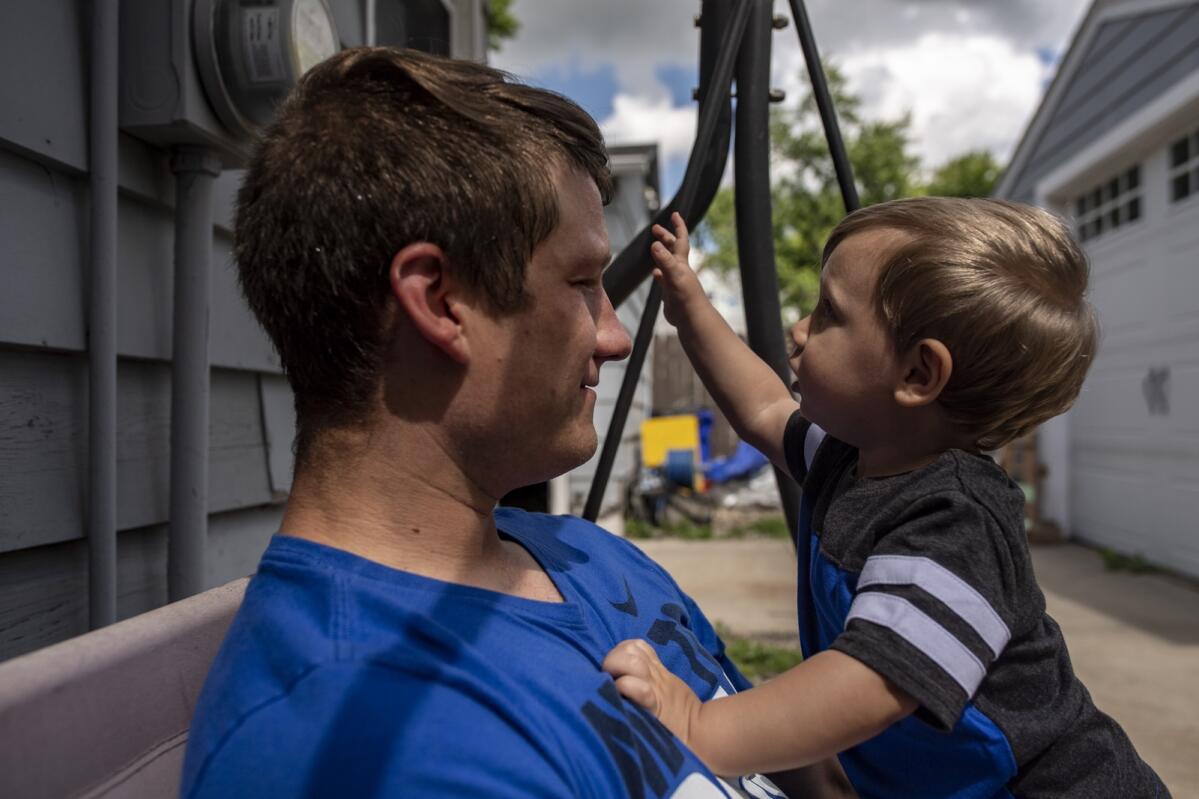 Quentin Blazicek with his son, Rhyett, during a June 8 visit to his Cedar Rapids home. Blazicek is in the process of regaining custody of Rhyett after a Department of Human Services investigation and completing the 17-week Caring Dads program. (Nick Rohlman/The Gazette)

CEDAR RAPIDS — Quentin Blazicek went through his twenties, jumping from job to job as he racked up traffic violations and other charges, including drunk driving.

Life came to a screeching halt in 2020 when he found out his former girlfriend was pregnant with his son.

“That little guy, he probably saved me,” Blazicek, 30, of Cedar Rapids says of the one-year-old boy who has the same shade of light brown hair as Blazicek.

When Rhyett – pronounced “riot” – was born on June 2, 2021, Blazicek knew he had to try to train himself so he could be there for his son.

Blazicek is one of four Cedar Rapids dads who signed up last fall for the Caring Dads program, a 17-week support group offered by Waypoint for dads who want to improve their relationships with their children to end or avoid abuse. controlling, abusive or neglectful behaviors.

According to the University of Texas Child and Family Research Partnership, children who grow up with involved fathers are:

Blazicek joined Caring Dads as part of an investigation by the Iowa Department of Social Services, which placed Rhyett in foster care.

Blazicek and his former girlfriend, Rhyett’s mother, have been working on themselves and learning to co-parent, he said. They now have regular visits and strive to share full custody of their son.

“Thanks to Caring Dads, I was able to put our differences aside,” he said. “If she has a problem, we can go ahead and just focus on him. Be more child-centered and leave the bull —- aside.

Blazicek had all the concerns of a new parent: how to hold the baby? What should I do when he is teething and won’t stop crying? How to clean up projectile vomit?

Waypoint staff answered some of these questions, as did Rhyett’s adoptive mother. During a difficult visit, Blazicek called his own mother, Myte Dahl, who is on active duty for the Air Force, stationed in Alabama.

“One of my first meetings was to set goals that we want to accomplish,” Blazicek said of the Caring Dads program. “One of mine was looking for things to do with my son.”

A Waypoint instructor suggested letting Rhyett finger paint with yogurt. Blazicek was skeptical, but he bought some vanilla yogurt, added food coloring to it, and let the baby spread the yogurt on the high chair tray.

“He had a lot of fun with it,” Blazicek said.

He also bought Rhyett a kid’s vehicle that Blazicek can use with a remote control. He straps the child into the car, then steers the vehicle around the driveway and yard.

Quentin Blazicek and his son, Rhyett, play with a remote control car June 8 during a visit to his Cedar Rapids home. Blazicek is in the process of regaining custody of Rhyett, which includes signing up for the 17-week Caring Dads program. (Nick Rohlman/The Gazette)

It’s the same yard where Blazicek grew up playing in the sandbox and, later, shooting hoops. He rents the ranch-style blue house from his father, David Blazicek.

Becoming a parent has been great for Blazicek, said his stepfather, Robert Dahl, of Cedar Rapids.

“We’ve always bailed Quentin out for the past 10 years,” Dahl said. “Now he is working hard, working overtime. He takes care of his bills. He almost reminds me of myself when I had my first child years ago. He takes care of everything. »

Blazicek worked as an auto technician and did electrical repairs and carpentry, but now he’s joined United Steelworkers and works third shift at WestRock. When state surveillance on his son ends, hopefully later this summer, Blazicek will organize his time with Rhyett around his work hours.

In the meantime, Blazicek is a proud dad. He knows Rhyett has six teeth and was in the 95th percentile for weight and height on his one-year checkup. Blazicek brags that one of Rhyett’s first words was “Daddy” and that the boy will start walking any day now.

Waypoint is recruiting participants for another Caring Dads support group, which would likely start later this summer. Dads can be referred by an agency they already work with or can contact Alexis Chadwick at (319) 731-6176 or [email protected]